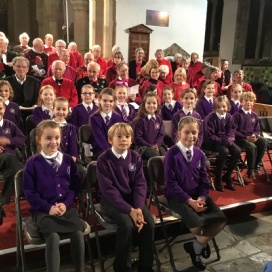 CG Choir were full of festive spirit this weekend. On Friday the choir headed to Hartley House Residential House to the residents and spread a little musical festive cheer. They sang so beautifully and their performance was full of sparkle - the audience were full of appreciative comments and keen to join in on some of their favourites. Following a huge round of applause they moved on to sing to some of the residents who weren't able to join us for the main concert. The choir had to sing a cappella and it was FAB-U-LOUS!

The following evening, the choir performed with a brass ensemble and the Cranbrook Choral Society. They sang performed several songs both independently and collaboratively. They were WONDERFUL! They charmed the audience and Dr Robertson and Mrs B were so, SO proud of their mature composure and super performances.

Our two year six girls delivered readings from the pulpit. Mrs B received a telephone call later in the evening from one of the organisers to commend both girls on their engaging performances.