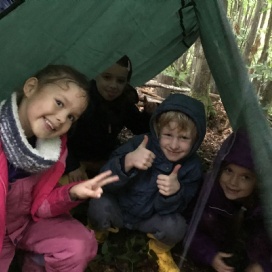 As the Orange Tips arrived in Deggs Wood, raindrops pierced through the canopy.

Sadly, it was not the weather for fire striking but the Orange Tips did not seem to mind. Instead, the children tried their hand at tying timber hitches and tension knots in order to secure ridge lines for tarpaulins. The children learnt the story of Sidney the Silly Snake and Simon the Party Snake - these stories helped to guide them through the process of tying the knots. It took concentration, teamwork and a touch of trial and error to conquer the knots. In the end, all of the teams managed to put up a tarp in which they could enjoy a hot drink out of the rain.

Not everybody wanted to stay dry and after they had finished lots of them chose to embrace the raindrops and PLAY!

Take a look at this week's film to capture a glimpse of what went on.