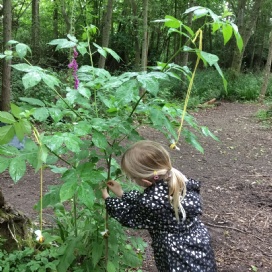 Class 1 had their first trip to Forest School today. I think it's safe to say that despite the rain they were buzzing!

The children arrived through the rain. They had been reciting the lines to 'We're Going on a Bear Hunt' on the way as they marched through the swishy, swashy grass.

We played a guessing game to work out the woodland names of the grown ups. Mrs Moorhouse is called Bracken, Mrs Eden is called Woodpecker, Mrs Green is called Catkin, Mrs Nesfield is called Squirrel and I (Mrs B) am called Foxglove in the woods - today was an extra special day for me as up until now we have never had a REAL foxglove IN the woods but in honour of Class 1's first ever session a beautiful vibrant pink one had bloomed in the centre of Larch Camp.

We took the children on a tour of the Larch Camp. They discovered the tree bog, the fire-circle and camp kitchen. We then headed up through an avenue of larch trees. I was asked where all the acorns were and we discussed how in summer the acorns are growing on the oak trees so the whole group were introduced to a particularly beautiful oak tree. They gave it a group hug and described its bark: 'hard', 'scratchy', 'bumpy', 'my bit is soft and green' (this was the moss that likes to grow on the bark) then we went off to see if we could find ANOTHER oak tree by matching the type of bark. The children did really well at this but a nearby larch tree did trick a few of them so then we discussed how in spring and summer we could use the leaves on the tree to help us be tree detectives. We had to look high and the leaves made pretty patterns against the sky. The children then found oak leaves that had fallen in the rain and some larch cones and tried to match them to the trees they thought they had fallen from. Jack even found the shell of an acorn that had been hollowed out by a hungry woodland resident!

We headed back to camp to talk about the ways we could look after ourselves (resilience), each other (community) and our environment (aspiration) at Forest School. Then we sat around the fire circle and, whilst enjoying a mug of hot chocolate and biscuit, the whole group introduced themselves and shared the things they were looking forward to doing over the next few weeks. These included: making things, building dens, climbing really high, watching the birds, cooking on a fire, going on the swing, getting muddy and 'everything'. The children also gave Mrs Marriott their suggestions for her woodland name. Spider, Red-Fox, Nightingale, Bee, Mrs Wood and Ladybird were all considered but the winner went to Wren because it is her favourite bird and she has some nesting in her garden.

After snack time, the children had free time to explore, discover, create and play. Why don't you take a look at the picture gallery together (click here) and discuss what they got up to. If you want to share their comments please post below.

At the end of the session, Class 1 were told what THEY are going to be called when they come to Forest School for the entirety of their journey through Colliers Green.....Beech Group. Next week we will be introducing them to ANOTHER area of the beautiful woodland and going on a Beech Tree hunt as well as introducing fire safety and possibly even a spot of campfire cooking!!