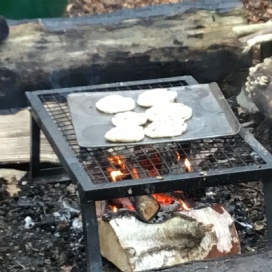 A soggy start to the day could not dampen Larch Group's spirits. They arrived in the woods full of smiles and eager to open the Dragon's Dare.

The Value of Community was flying its flag proudly in the woods today.

Based on the success of the two new games last week, the Sneezy Dragon introduced a new game called 'Seeker'. The game called on the skills of team-work, communication and trust. They needed to work as a team to guide the blindfolded seeker towards the Dragon's Egg without using any words, only sounds.  They did achieve their goal but their were challenges (more some than others) along the way and so the game allowed for some good points to reflect on and ways that they could improve how they played it and in so doing improve their methods of communication. The group then took on different activities based on their interests. Some used fire steels to light fairy fires for which we saw impressive levels of tenacity and perseverance. Some mixed damper-bread-dough to cook over the camp-fire: it was very heartening to see that if other members of their group had chosen not to participate they still very much wanted to cook for them so that, they too, could enjoy the food. Some worked hard to boil water over the Kelly Kettle and very graciously decided that EVERYONE in the group should be rewarded with a toasty mug of warm blackcurrant - next week we are going to try fruit teas & rooibos! Another group successfully used their knowledge of the knots we have been learning to put up a hammock which was safe to lounge in.

The reward for all their hard work, kindness and camaraderie was to break open the dragon's egg.....the contents a 'frosted pine-cone' that was put on the camp fire and turned the flames blue and green "cooooooooool". The adults listened on as the group chatted about their 'best bits', discussed how they had overcome problems, offered each other compliments and gave increasingly high-marks out of ten for their camp fire cooking (a million out of ten seemed to be the favourite mark!).