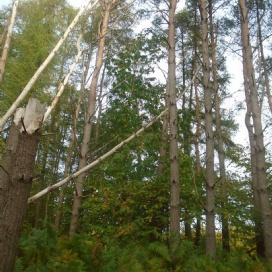 Into the Forbidden Forest!

This week we received an invitation to visit the Forbidden Forest. Bracken was not sure about whether we should go. However,  the children decided that as we had special permission it would be OK -just this once! They all promised to keep to the woodland path and we set off on our mission to try and find out what had happened to the trees in this area. Sneezy Dragon was very concerned that he had caused this devastation after a particularly nasty cold, but the children came up with other ideas and lots of discussion followed:

‘Maybe it was the wind.’

‘If it was a bad storm, why did the other trees not fall down?’

‘Look! There is something growing up the trunk of that tree.’

‘The bark on these trees is not the same as the other pine trees.’

Before returning to our camp, the children shouted their suggestions up to the skies in the hope that Sneezy was listening and wouldn’t need to feel guilty anymore.

Back at  Larch Camp, the children soon got very busy with their chosen activities. Many were keen to decorate the tree cookies that they had found along Dragon’s Drive as we made our way back from the Forbidden Forest. Some chose to make bird feeders using a delicious recipe  of lard and seed that they mixed together and then squished  into pine cones. We will be hanging these up next week to provide some extra food for our feathery friends as the weather gets colder.

Squirrel worked with a group to get the camp fire ready to toast  the sweet chestnuts that had been collected. Despite some of the children being  a little dubious about trying these at snack time, everybody decided to sample them. It is wonderful to see how the children are so willing to embrace new experiences at Forest School. Most agreed that they were delicious and wanted more!

The tool area was busy again with several children creating bird models from the natural materials available. They really have mastered the use of palm drills to make holes into which they insert suitably sized sticks to make the joins for attaching different elements of their models. The children considered other means of attaching things to their models and experimented with string. Knot tying is very tricky! The den builders were also trying to securely attach rope to help in their construction projects so next week the children have taken up the challenge to try and learn some  knots that may be useful for their Forest School activities. Watch this space to see how they get on!

Click here to see this week's session in the gallery.